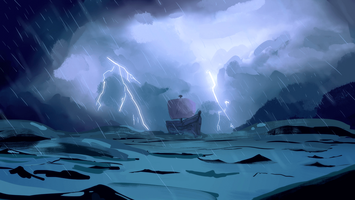 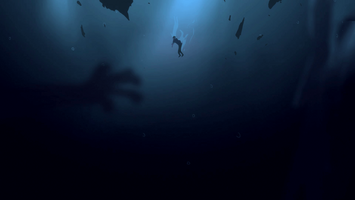 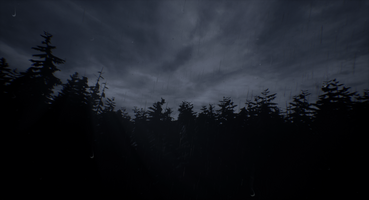 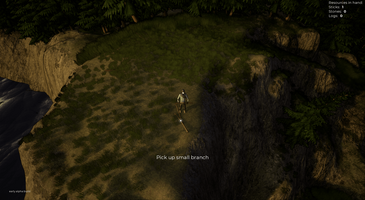 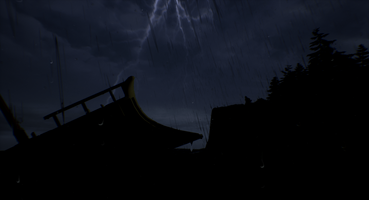 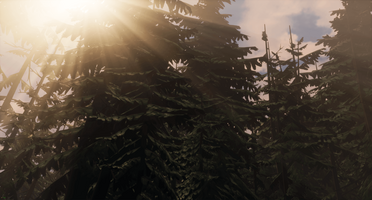 Hey everyone! I think it's time for an introductory post. Here I want to share our work and progress, impressions and difficulties, as well as wins - small but significant for us.

A short teaser will help you immerse yourself in the atmosphere of the game.

From idea to action

Perhaps I'll start from the beginning. Almost two months ago, I saw  an announcement of a contest (two months long) on one of my favourite websites. At that time, I had been fiddling with the Unreal Engine for about a month (I wouldn't call that a serious study process) and decided that this was my chance and a great opportunity to realize one long-standing idea. For over a year, I had a concept of a simple story-driven game. That was a pretty vague concept of the plot with no gameplay description.

The idea was that we observe different events that happen in the same place with different heroes through the years, and we participate in them a little - we help build something, collect something, and so on. The emphasis in the plot was on the continuity of generations, the cyclical nature of life and all sorts of philosophical questions.

The first impulse was to make some kind of prototype quickly, but I decided to find myself a team. A couple of people responded very quickly and liked the idea.

While there were lively discussions in the Discord channel about the concept, I began to implement the most basic things little by little. The location blockout looked like this:

By the time I was done with the interactive objects base class, showing monologue lines and other small stuff, suddenly, almost a month had passed.

I still had to expand the concept (who would have thought ...) into an adequate “scenario”, from which it became clear how many scenes will be in the game, what objects will be present in them, what the player will do and so on.

The organizational moments also took a lot of time - we put up the task management in ClickUp, created a table in Google Docs. And then another. I love labels (͡ ° ͜ʖ ͡ °). Back then, I struggled with my OCD and was convincing myself that I was doing nonsense and I didn’t need all of this - we don’t need to do everything “by the manual”. But now I am grateful to myself because, without a clear list of tasks and their categorization, we would simply have drowned in production chaos.

At the beginning of the second month, the realization came that we had done so little. It can be said that there was nothing much - only the most basic mechanics (such as moving and interacting with different objects at a basic level) and partially - the first scene (out of eight that were planned!).

Somewhere at this stage, an urgent meeting of crisis managers was convened. That is, we all just gathered in the voice channel and began to discuss what to do. In the heavy creative agony, a harsh decision was made - to massively reduce the scope of the game, throwing out the change of epochs and focusing on one. The script was rewritten again, up to four scenes, on the assumption that there is little time left, and we need to do a lot.

Another concept update and the current state of things

A week ago, we had “finished” three scenes. Why in quotes? Because a lot of things are simply omitted. Cutscenes - because it would take a lot of time, but the gameplay won't suffer without them. Some chains of actions were simplified. And I won't even mention "brushing up" the landscape, the placement of “greenery”, color correction and post-effects.

The completion time of these three scenes was about 10 minutes, which evoked a light melancholy. Once again, the council of elders was gathered, which lasted about five hours. Stormy discussions were followed by dank memes and back again. This meeting was the most productive of all time, and it was there that we made several important decisions, voiced a certain number of clever thoughts, and identified the main problems.

The first problem was that we simply won't have time to tell you the full story. And what's the point of presenting its part, which in essence is just exposure, right? Therefore, we made a not entirely correct decision (in terms of adequate game development) and made further edits to the plot. Well, edits is a subtle word - we actually added a whole new layer to the storyline, introducing the second character, which is in a certain way connected with the first one. So the story has gotten two times bigger.

“Wait, what... How the heck does this help reduce development span?”

Directly - in no way. But at the very beginning, when we all got together, we decided to see the game through to release, regardless of the contest, because it would be a pity to throw away the project into which so much time and effort was invested.

The second problem has already been stated above - it takes about ten minutes to complete the three scenes. This is not a problem in itself, but initially, we wanted to make the gameplay very slow and unhurried, almost meditative, and because of the frequent change of events, the atmosphere and the effect of immersion are lost. Therefore, in the coming week, we'll be correcting this - the second and the third scenes will be expanded, but not by violently stretching the gameplay in a “kill 150 boars” manner. In the second scene, for example, we will expand the existing chains of actions so that they look less clumsy and more authentic. In the third scene, we will add a new sequence of events that will lead you to a new place on the map (before that you will be busy with affairs only ashore) and will give some answers. Or new questions - nobody knows how everything will turn out.

Plus, there will be two more scenes in which you have to take care of the hero, and in one of them a new mechanic.

In general, our game is more about story and atmosphere than about complex and unique mechanics. We can say that the correct decision was made to make a small but exciting game, and not to blow it up to the AAA scale with the risk of never finishing it. And, actually, for you to be able to appreciate our work fully, we will make a playable build before the deadline.

Until recently, there were four of us: